I bought Mako early on since as Lich you lack the dps, and am not a big spender like some people so I only settled for Rose with the 10$ purchase, but since the patch oh boy did he become a main hero for me. He is now level 34 and Rose 35 and he helped me freatly to get those impossible for Lich void perfect timed challenges on the Dwarf level, I cleared the 2nd stage fully at castle 20.

I wonder though, because it seems like I am unlucky with the drops, what items and what are the strength stats for him that give one up on his abilities because theres no other Makos from the replays I watched that have him a main like I do
Top

My house leader and I use Mako with great success, he's a really fun hero IMO. Here's a build: 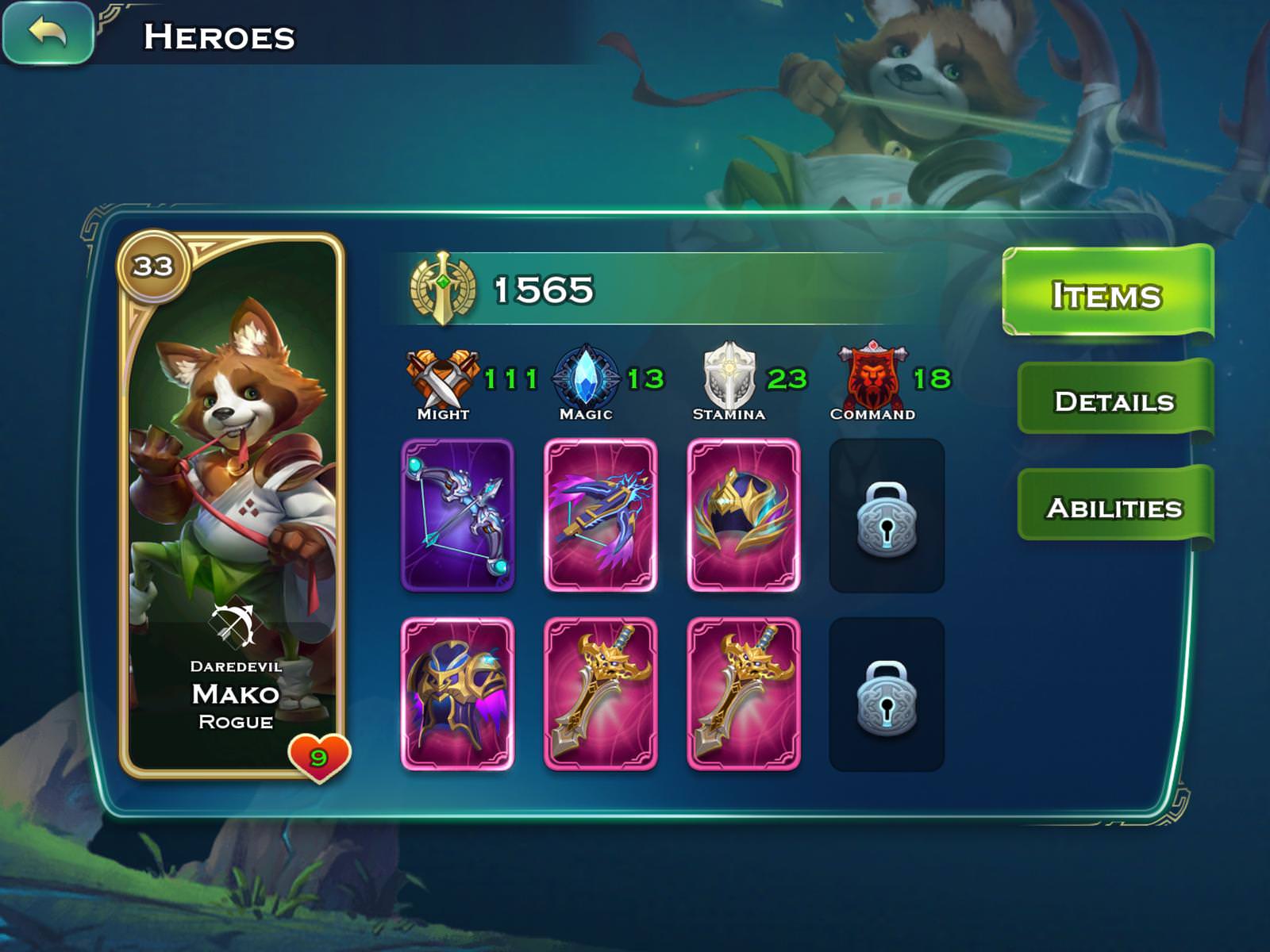 He's an amazing hero for damage now i also i agree. Sadly enough i'm rakan and i need to invest command into him for the crossbows lol
Top

Manuel wrote:
My house leader and I use Mako with great success, he's a really fun hero IMO. Here's a build:

Can you show abilities? What race are you? What type of damage is the little guy doing?
Top

What are the stats on the items and what ability do they increase? I am having a difficult time getting items for him...
Top

I've been using him for quite some time as a passive hero, I just stack might on him with a speed dagger and he tears things up. I haven't tried his actives in a while, not sure if they've gotten any better.
Top

That's not my equipment but:
The first bow is Moon Bow, +5 might +2 command +20% crit chance. Then he runs Stormlight set for "attacks have a chance to poision the enemy" which I wouldn't use myself but it gives high raw stats.

I myself am Rakan with a hatred for Arbalesters so I dump all of my Mako's points into his Crack Shot, Killer Instinct, Scatter shot and Eagle Eye abilities, I'm not a fan of the one that spends 1 energy to use so I ditched that one as well even though it IS strong. A well placed Scatter Shot can melt a mech frontline or kill far away spiders.
Top

Why dont you like arbalesters? i think those xbows are probably one of the best units they got since they can reach the backline with the piercings?
Top

sponkss wrote:
Why dont you like arbalesters? i think those xbows are probably one of the best units they got since they can reach the backline with the piercings?

To be fair I'm still messing with unit compositions but so far it seems that arbalesters are just suicide units. At max research they get increased range which might fix this but right now they tend to get VERY close, more often than not even merging with the frontline... which obviously gets them killed super fast if there's any splash dmg like tanks/rockets/spiders...
Their ability surely is amazing because it pierces AND pushes back a bit - thus kinda fixing that, but it's very expensive to use. (3.5k elixir or so at lvl X iirc) That makes them good troops for duels IF you use the ability but HORRIBLE for doing daily quests cuz you just end up with all of them injured after a few quests or having to retry a million times.
So unless I max the + range tech (which is faaaaaaaaaaar) I'll keep using my ninjas who don't walk into the frontline and get themselves killed. And frankly, 24 gold space for some units I can barely use in quests is a big no for me.
Top
Post Reply

Users browsing this forum: No registered users and 9 guests
×