Hey everyone, I'd like your input on a certain "problem".

For starters, I do it too, so I stand to "lose" from proposing a change to this, but I find it kinda ridiculous.

As a player you cannot be attacked by multiple ppl at once, your stronghold can though.

By ppl simultaneously attacking a garrison, what happens is this:
-First attacker lures the "best" garrison troops with whatever troops he needs to minimaly field (sometimes just bronze, I have no problem with that actually)
-Second attacker gets the lesser garrison trooops
-....and so on
-after X ppl attack (depending on garrison size), the next person and the ones after that (while the previous ones are still attacking) gets ZERO defenses and can practicaly field all siege and send someone back to capital with just 2-3 ppl doing 100k siege damage (not unrealistic).
So your garrison troops might actually be mostly intact since you might have been "bronzed" but suddenly you're back to the capital! Cool, right?

I'm not sure Lilith had that anticipated, but even if I do it too, I think it should change.
Maybe put a limit of X (5 maybe?Just threw a number) on how many ppl can simultaneously attack a stronghold?

What do you guys think?

I understand that this might limit people's choices but taking account all variables, I think some change is warranted.
Top

Are you missing my point? It's not me complaining, as there are always whining posts....I'm not a victim of this, on the contrary...
Top

its part of the game bro, oh i miss those days

This game is shit. Balance is out the window. New servers everyday and heck, you get a lvl 20 Rose guaranteed at the beginnig for 100 bucks! Thats easily 20k dollars per server opening...
Top

RoronoaZoro wrote:
This game is shit. Balance is out the window. New servers everyday and heck, you get a lvl 20 Rose guaranteed at the beginnig for 100 bucks! Thats easily 20k dollars per server opening...

A) The game is pretty well balanced atm (yes they are missing some love to Lich) and if you get Jacques out of the picture (on old servers a few players have Jacques since he was not a insta buy back then).

B) New servers everyday: Yep this is not really a problem since we are waiting on the mergers, most of the servers are farmville atm, players should enjoy this time, i log get my quests done, void mirror done, buy some wood from mirror and queue my stuff, dont want to think how is going to be after merge, hopefully i will have time to work haha

C) And the chest thing will always be a scam, is the oldest way to get $$ in any game
BOOM
Top

Level 7-8 catapults get you 100k wall damage? haha wow I'd love to see that. Who would have 16 silver cats to begin with anyways unless you're a whale then maybe..
Top

Strappedcorn wrote:
Level 7-8 catapults get you 100k wall damage? haha wow I'd love to see that. Who would have 16 silver cats to begin with anyways unless you're a whale then maybe..

It’s possible if his entire gold cap is spent on gold cannons+a half dozen silver. Might have to throw in a couple borrowed gold cannons too.
Top 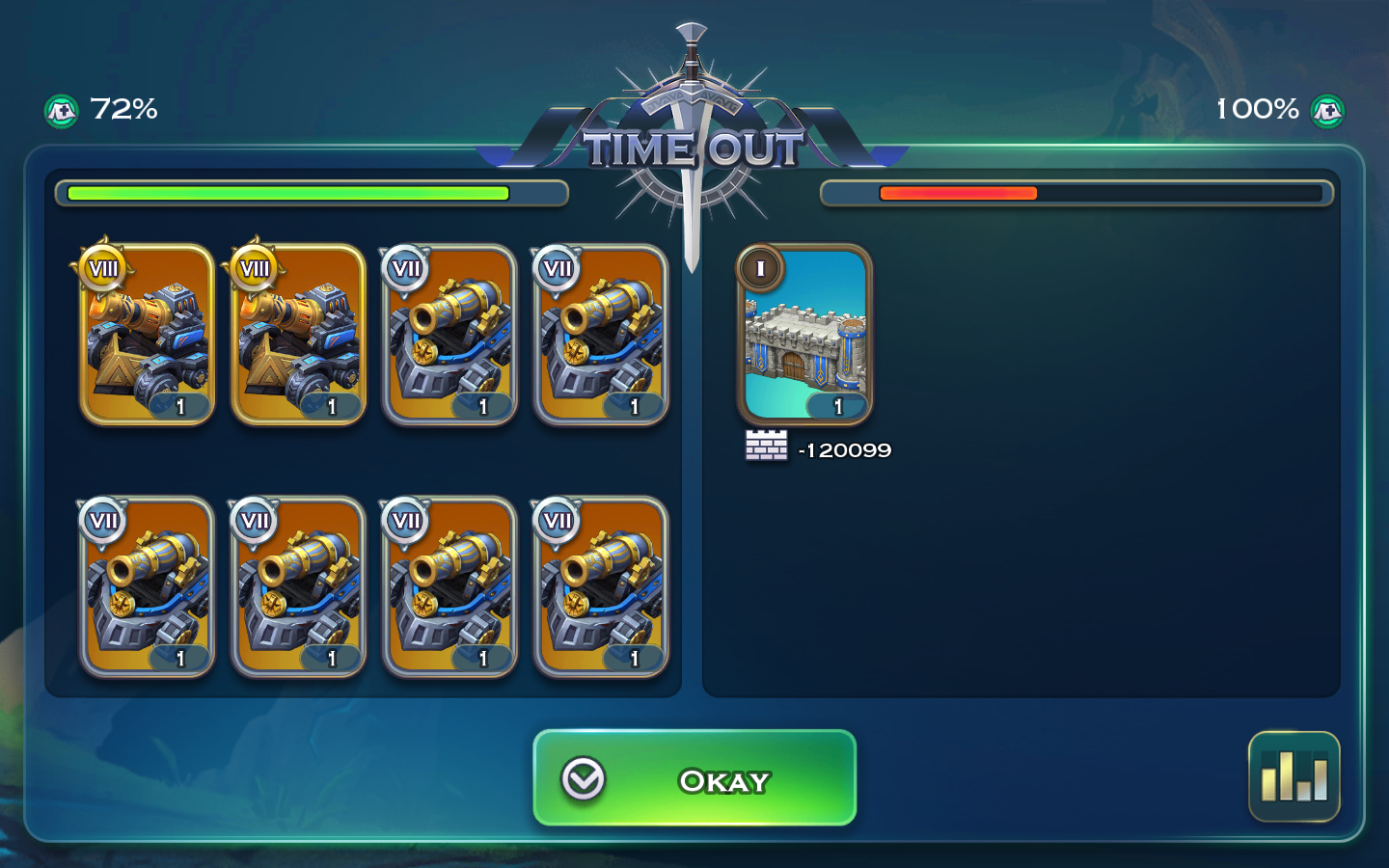