1.Players at level 90 or above can purchase Sylphi and Chrona Soulstones from the Goblin Peddler and Black Market Smuggler.

I actually was really surprised to see this on the patch notes, but i really should have seen this sooner, You failed to mention the price of these.

How is this gonna help anyone? The people with a total of 43.200 Diamonds to spare, already have sylphi at 7 stars.
I don't know why i'm surprised about this cash grab.

It's just really disappointing, I've been trying to keep playing this, but you guys keep making it harder and harder.
Top

You can also buy them with gold, although it is more expensive then other heroes. 5 sylphi SS is 2 million and chrona is 1.75m
Top

432 million gold is possible for old lvl 100 players. But in my opinion the diamond option is a trap for rich or impatient players, better to spend them somewhere else, it's not like a maxed Sylphi is gonna make you top 1 in everything.
Looking at the glass half full this means that now everyone can have her.
Top

It is not cheap and not what most of us hoped for, but I will pay gold when she is available and that’s okay. Will take long, but it is progress.
no more money from me
Top

We should not be happy with this #riot.

Only reason some people are happy is because they held her back for like 10 months... so now that we finally get her it's in this ridiculous retarded way.

100s of people got scammed when buying the Salus skin for armor reduction and now Lilith lets us know that the hypocricy is real because they're releasing sylphi in such a stupid way. Hidden behind a level wall and then a gold/diamond sink. Think of this, what will happen to the other heroes, will they all go into the smugglers? And when that happens how long do you think it will take you to reliably get Ss for those heroes.

2 million for 5 SS is a ripoff and we all know it... the argument is better then nothing is true but doesnt make it right.

rate the app 1 star, ask for a refund on the salus skin or atleast spam their customer support with it and it's time that the customers get what they pay for.
Top

This is the problem with mobile games. If there is an issue that seriously upsets/annoys players, they cannot protest outside Lilith's HQ demanding a better quality of game (beside that, if the head office is in China, then there is no chance of the protest, as any demostrators would be arrested and incarcerated for causing 'civil unrest' ; why the rest of the world just LOVES communism). If there is a serious issue within/affecting your country, then you march towards the seat of government to put pressure on leaders to start thinking and doing what they are paid to do, but in the game, all we can do, as Rashar commonly says (and he has an excellent point too), is rate the app 1 star and spam the customer support continuously until something happens. However, Lilith can just ignore this entirely, as they seem to be doing right now and as they have been for the past year or so.
Top 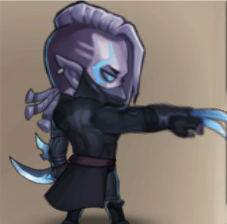 Sylphi is something special since she have the only medallion in the game which affects all female magicians. I see why she considered as harder to get than a Serafine. There is no reason why Chrona land there. For that 1.8 mill from 200 gold chest I will get a lot more valuable SS then 5 Chrona SS. Definitely they are not in the same page. Im looking forward where they will put Goram around maybe in next year. About skin, I am a bit happy about these happening. Might next time all think before buy those skins and they will stop releasing them.
Top

So you're happy 100's if not thousand of people got scammed out of their money... takes a special kind of sadist to say things as stupid as that.

The purchaseable skins are pretty crazy, but people buying them deserve to get what they paid for, right now they advertised 50% armor reduction and we got 5%...

Imagine in real life sellers advertising 50% discount and you get only 5%.

People deserve their money back or get what they paid for regardless of what your opinion is of people who spend money on these kind of things in game. Especially people who dont have a lot of money and then get something entirely different then what was advertised.
Top

Those people who bought a skin where the description was clearly meaningless then I can just laugh on them. I wont drop money for a thing when it comes with a description where not even was one correct sentence. If you see a lot of mistskes in a text, where from you even know there is any correct thing in it? Saw 50% with cdgjnbftdxvjjbvxsthv text and than ppl choosed what they want to like in it and ignores other parts. All saw that and some take the risk. Lilith responsibility to make correct stuffs, but if it can clearly seen they did a stupid thing, why even one bother to take part of it? So who bought the skin they dont know exactly what even they paid for and then surprised they didnt get what they imagine what it would be. Thats not only Lilith fault.
Top

Actually it is, false advertising is a form of fraud where I am from but I guess each country has different concept about it.
Top
Post Reply